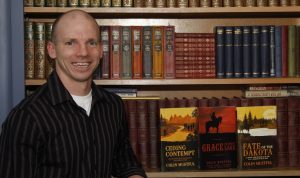 Author of three novels, Colin Mustful tells the story of the tragic and complicated history of the U.S. – Dakota War of 1862.  This war, which has often been overlooked or misunderstood, resulted in the hanging of thirty-eight Dakota Indians in Mankato, Minnesota, the largest mass execution in United States history.  Utilizing elements of fiction and nonfiction, author Colin Mustful considers this important part of Minnesota’s past in a manner that is both compelling and historically detailed.